So as I said before, spoonies are slowly getting more exposure in the spotlight! With books being turned into movies and tv shows it seems like it's a new trend for viewers to watch medical shows from the patient's view.  ABC Family just premiered their new show called "Chasing Life" 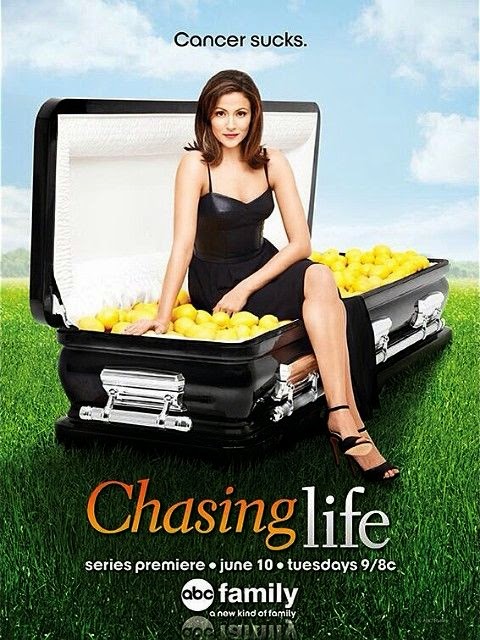 Can I just say how much I love this picture? It's so true!

If you don't know what the show is about here's what the show's website says:
"Chasing Life follows twenty-something April a smart and quick-witted aspiring journalist, who is trying to work her way up the ladder at a Boston newspaper by trying to impress her hard-nosed editor. When not pursuing the latest scoop, April tries to balance her ambitious career with her family – her widowed mom Sara, rebellious little sister Brenna and her grandmother. Just as things start to look up at work, home and on the romance front with co-worker Dominic, April gets the devastating news from an estranged uncle that she has cancer."

The first episode does a lot of backstory so if you're wanting to see the whole medical side ASAP sorry, you're not going to see much yet. For the most part, Chasing Life is pretty accurate medically. Before becoming spoonies our life was "normal" at some point. We had our crazy family, a drive to follow our dreams, trying to excel at our job (or school), waiting for "the one" and having our crew or best friends to keep up with.

But then, all the sudden, our life comes to a screeching hault. Be it all the sudden getting sick, having an annual check up, or the bizarre incident April has at a blood drive. Life stands still when our body changes and/or getting a life altering diagnosis. In some situations such as April's, everything is FINALLY coming together, we're in the middle of living life. You think nothing can stop you, that everything is finally is in place, life quickly laughs at you and says, "here you go!"

And our reaction to all this? Obviously different people have different reactions, but overall we go through similar steps and the show does great at that. We deny what is happening at first, thinking if we ignore it everything is going to be okay. Then, something happens to where you have to accept that something is going on with our body. This is where you either feel the need to tell those close to you, both so they know and help you, or keep it to yourself, put your brave face and keep on keeping on. April (like many of us) goes back and forth between the two. A mixture of not finding the right time and not wanting to be a buzzkill to those she cares about.

But hey, it's a TV show, they gotta add some drama! Trust me spoonie life isn't that great. You're mainly back and forth between hospitals, doctor visits, and treatments. You don't get out much because you don't have the energy and as much as everyone thinks how awesome it would be to be stuck at home all day you're wrong. Remember summer vacation when you were little? It sounded great but by the 2nd week you're bored to death? Well, it's like that. So April's estranged uncle becomes her doctor, her home and personal life become quiet interesting.

Anyways, like I said, the show is pretty accurate when it comes to her medical journey. By the end of the episode she accepts that she has cancer and is ready to fight. And fight she will! She becomes determined to give it all she has but she has no idea what the road is like in front of her.

Now, I obviously don't know how the show is going to be but it looks very promising. The previews they showed before the show aired made it look really good and the first episode didn't disaapoint.


Have any of y'all seen the show? What do y'all think? Let me know!

Until next time,
Aly
Posted by Unknown at 11:53 PM