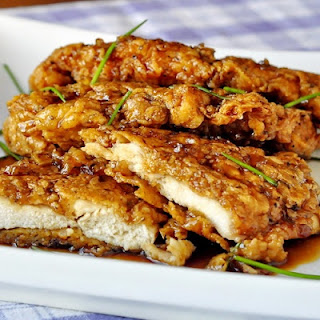 Ok so like many of the pinterest recipes I try this was YUMMY!!!! But something tells me it was a one time deal and not a let's have it again thing.

Now I LOVE crunchy food. And it might have been something we did but it did NOT end crunch. It tasted like things that get breaded. A little crunch but not much.

As for the seasoning it was very good but for my mom and I we thought it had a little too much ginger. That is my only main complaint/suggestion to fix.

As for the sauce, oh my goodness!! It is delicious! But not recommended for those who can't have too much sugar. I would use this sauce to have with nuggets or strips. Now what happened was I cooked the garlic like it suggested then added the soy sauce and honey but it didnt simmer. So I had to bring it for a quick boil and leave it on medium. I was worried that it wouldn't come out right but it taste like it did. 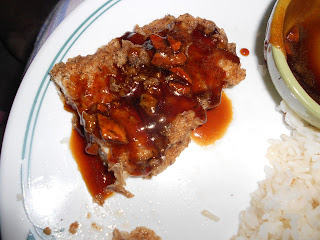 Here's how ours turned out!
Circulon 12-In. Covered Skillet (Google Affiliate Ad)